Injen Technology Will be at Race Wars LA ! 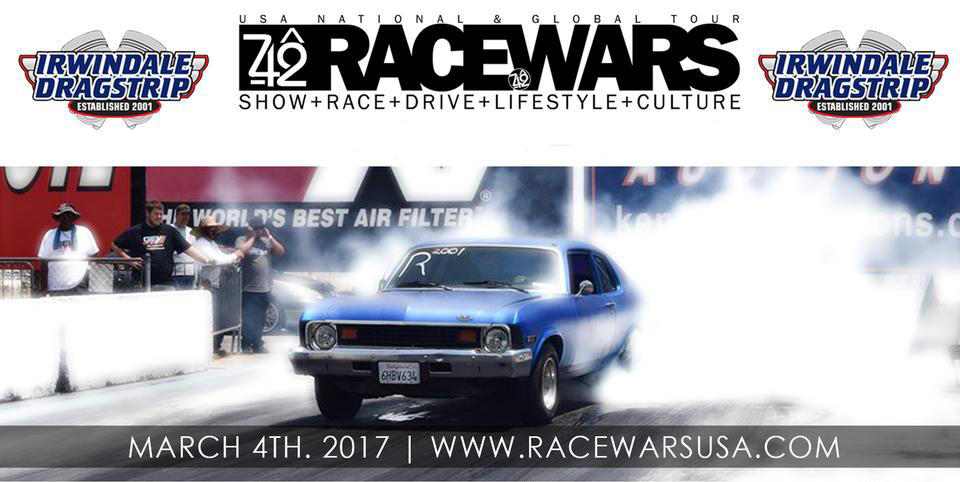 Like a "Fast & Furious" movie come to life -- only legal -- RaceWars LA brings all the high-octane excitement of a street race to Irwindale Speedway. Combining drag racing with show cars, vendors, live music and, of course, gorgeous models, this car lover's event has only been getting bigger and better since it began in 2015. This L.A. edition kicks off the 2017 world tour with some of the hottest builders in the country showcasing their work. Whether you're into classic cars, imports, American-made, trucks or bikes, 742 Race.Wars LA has you covered.

What seems like yesterday, has now become our second tour for the national event  RACE.WARS USA. A tour that started by an idea from a movie has lead itself to become an anticipated event, nationwide. What started in Los Angeles, CA in the Summer of 2015 with a record attendance, then travelled to Las Vegas, NV for an event that set the standard in production, to then leaving it's mark in Dallas, TX with an event that shook its big state, returning to Los Angeles for it's BIG re-appearance in which many thought would never happen again.  RACE.WARS USA has become a lifestyle movement that will continue for years to come.

Join the production event that opens the doors for Enthusiast, Manufacturer's, Fans and Media to a whole new style of culture. With today's growth in branding opportunities that consist of grassroots events, social media, exposure and lead generation, is no wonder why  RACE.WARS USA is an event not to miss.

We're the Experts
Ask us anything. We are the professionals! Largest Selection
If you don't find the part, we'll get it for you!

Have a question? Ask the pros

Email Us
Get answers from the pros Call Us
Give us a call now!
909-839-0706
Copyright © 2023 Injen Technology. All Rights Reserved.
Powered by Web Shop Manager.